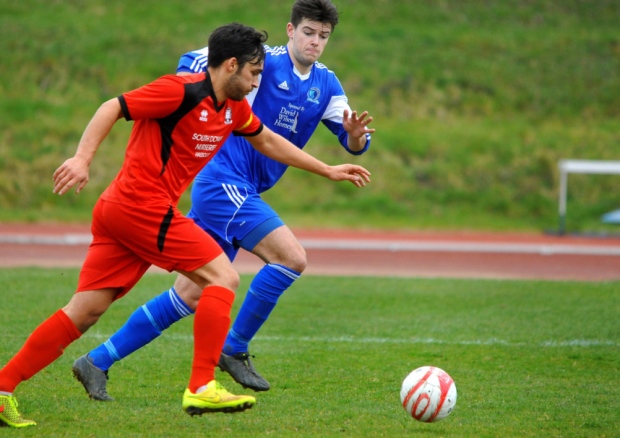 Thursday 01/05/08 After a month of internet problems, the website is finally fully up to date. Since the last update, the youth team secured the County League Under 18 Cup, thanks to a Phil Johnson hat-trick in a 3-2 victory over Arundel. The reserves have also completed their season, finishing in 7th place and making the semi finals of the Mid Sussex Senior Cup. This Saturday we welcome a Sussex County League Invitational XI to The Beacon in a tribute match to Dave John, who is standing down from his role as first team manager at the end of the season to take up a new position as director of football. Please come along to the Beacon and show your appreciation for the contribution that Dave has made not only to Hassocks, but to football in Sussex in general. Kick off is at 3pm, and entrance is only £3 On Sunday, the club will be holding its end of season presentation ceremony at the Beacon. The day will begin at 2pm, and the bar will be open as well as a buffet and a bouncy castle. The event is free, so please come along and support the club once again

Wednesday 02/04/08 Another rain-hit weekend saw the first teams clash at home to Wick postponed, and this has now been rearranged for Saturday 3rd May. The reserves were the only team to play, as they went down 4-1 away at Hastings United. Tomorrow night, they travel to Arundel with a 7.45pm kick off in the Reserve Premier

Thursday 20/03/08 Saturday saw the first team claim a 2-1 victory over Pagham, with both goals coming from Simon Bristow. The reserves defeat Hastings United 4-1, but their game on Tuesday against Arundel was postponed This Saturday, the first team travel to Worthing United, while the reserves are at home to Worthing. The third team take on Lindfield away, and on Sunday the youth team are also away, against Peacehaven & Telscombe

Monday 10/03/08 On Saturday, the first team went down 2-0 away at Three Bridges, while the reserve team were 3-1 winners away at Eastbourne United Association, with goals coming from Francis Dellow and two from Phil Johnson Tonight sees the third team return to action, as they face Felbridge at the Beacon with a 7.45pm kick off

Tuesday 04/03/08 The first team were 2-0 winners over Chichester City United on Saturday, with Laurence Robinson and Spence Slaughter getting the goals. The reserves beat Shoreham 2-0, while last night the veterans defeated East Grinstead Mariners 3-0 at the Beacon The reserves are tonight at home against Crawley Down, with a 7.45pm kick off at the Beacon

Monday 25/02/08 The first team got back to winning ways on Saturday, with a 2-1 victory over Pagham with goals coming from Spencer Slaughter and Simon Bristow. The reserve team went down 3-2 away to East Preston, Dan Jacques and James McKenzie scoring, and the third team also lost 3-2, away at Willingdon Athletic, with Mike Goulden and Phil Johnson scoring. On Sunday, the youth team won 2-0 at Ringmer, with Nathan Miles and Phil Johnson getting the goals This Wednesday, the reserves are in action in the semi final of the Mid Sussex Senior Cup, facing Burgess Hill Town in a local derby at The Beacon. Kick off is at 7.45pm, so please get along and support the team. On Thursday, the youth team face Pease Pottage Village at home, with a 7.30pm kick off

Thursday 21/02/08 Last night the reserves went down 1-0 away to Oakwood. This Saturday sees a full set of fixtures for the club, as the first team host Pagham with a 3pm kick off at The Beacon, the reserves travel to East Preston which also kicks off at 3pm, and the third team are away at Willingdon Athletic with a 2pm start. On Sunday, the youth team travel to Ringmer with an 11am start, while the veterans are also in action with an away match against Ardingly Village, which also begins at 11am

Monday 18/02/08 On Saturday, the first team drew 0-0 at home with Shoreham in Division One. The reserves progressed to the next round of the Mid Sussex Senior Cup thanks to a 7-4 win over Lindfield, with a hat-trick from James Laing and the other goals coming from Dan Jacques, Tom Stripp, Michael Bates and Alex Ternouth. The clubs race night was also a huge success, with over £500 being made, so thank you to everyone who attended This Wednesday, the reserves travel to Oakwood in the Reserve Premier, with a 7.45pm start at Tinsley Lane

Wednesday 13/02/08 The first team were defeated last night 1-0 away at league leaders Crowborough Athletic. On Monday, the veterans side returned to action but were defeated 6-2 at home by Pease Pottage Village, with Dan Maskell and Richard Strange on target. Tonight, the reserves take on Crowborough in the Reserve Section Cup at the Beacon, with a 7.45pm kick, and on Thursday the youth team face Hurstpierpoint at home with a 7.30pm start The clubs race night is now only 3 days away. Please try and get along to the Beacon on Saturday night to support the event, which starts at 7.30pm

After seventeen years managing Hassocks Football Club, Dave John has announced that he will be relinquishing the reins at the end of the season, and moving ‘upstairs’ to become the Club’s first Director of Football.  Dave explained to the Club that the recent illness of his wife Ann, herself a familiar sight at the Beacon where her cakes are legendary, had prompted him to take the decision to stand down from a post that over the years has taken up an increasing amount of his time as the Club progressed from Intermediate football in Adastra Park to become a well regarded member of the Sussex County League First Division.  Dave said that Ann’s illness - thankfully she is now well down the road of recovery – had caused him to reprioritise his time and after a number of discussions with Chairman Derek Hurley, he has agreed to take up the post of Director of Football where he will have overall responsibility for the continuing on pitch development of the Club but without the day to day management pressures. Derek Hurley said that the Club fully understood Dave’s decision, and were keen to see him utilise his considerable football experience at the Club.  The development on the pitch during Dave’s reign had been considerable to match the exciting progress off the pitch that recently culminated in the opening of the new clubhouse and the purchase of some 6.5 acres of adjoining land that will be developed for additional football purposes.  Dave’s new role will maximise his experience whilst freeing up more time for both him and Ann.  The Club felt that it was important to act quickly to get a replacement as 1st XI manager, and Derek was delighted to say that the post would be taken by Mickey Jewell, presently manager of the Club’s successful Reserve team, who would bring a wealth of experience to the position having managed with great success at both Lindfield and St Francis Rangers.  Whilst Mickey will officially take up his new role from the end of the season, the Club will take the opportunity this season for Mickey to gradually work more with Dave so as to make the ultimate take-over as seamless as possible. Mickey Jewell confirmed to the Club that he is delighted with the opportunity, albeit tinged with sadness at the reason for the vacancy.  He had enjoyed his two years at Hassocks and felt that the future was bright for a Club that prided itself on developing youngsters through the Youth Team and the Club’s three senior sides.  He would be seeking to continue the successes of Dave John, with the target of giving the Club the opportunity to move up the football pyramid system in the next few years.

Monday 11/02/08 It was a disappointing Saturday for the first team, as they were defeated 4-0 at home by Arundel. The reserves picked up a 4-2 victory away at Hailsham, with braces from James McKenzie and Simon Bristow. The youth team were 5-0 winners away at St Francis Rangers, with goals coming from Phil Johnson, Arni Kublickas and a double from Nicki Pitcher. Tonight sees the veteran team return to action, as they take on Pease Pottage Village at the Beacon with a 7.45pm start Just a reminder as well that the club is holding its race night this coming Saturday, so get yourselves along to the Beacon for a chance to win some big money and other prizes. The evening kicks off at 7.30pm

Monday 04/02/08 The first team returned to winning ways on Saturday with a 3-2 victory away at Chichester City United, with goals coming from Spencer Slaughter, James Laing and Laurence Robinson. The only other scheduled game for that day was the reserves facing Crowborough, which was cancelled. Tonight, the third team take on Forest Row at the Beacon, with a 7.30pm start

Monday 28/01/08 The first team were defeated 2-0 at home by East Preston on Saturday, while the reserves defeated Selsey 4-2, with a hat-trick from James McKenzie and Dan Jacques adding the other. The youth team were 5-1 winners away at Whitehawk, with Pat Rose, an own goal and a hat-trick from Phil Johnson. Tonight, the third team are in action at The Beacon as they face Lewes Bridgeview in Mid Sussex Premier League action, with a 7.45pm kick off

Wednesday 23/01/08 The first team were last night eliminated from the John O'Hara League Cup following a 1-0 defeat against Ringmer at The Beacon. This Saturday, they face East Preston at the Beacon, while the reserves are away at Selsey, both games kicking off at 3pm. On Sunday, the youth team travel to Whitehawk, with an 11am start

Monday 21/01/08 Saturday saw the first team pick up a 1-1 draw away at Eastbourne United Association, with Stuart Faith getting the Hassocks goal. The third team went down 3-2 away at Maresfield Village, with Tom Barnes and Nathan Miles getting on the scoresheet. This Tuesday night, Ringmer are the visitors to the Beacon in the John O'Hara Cup, with a 7.45pm kick off

Friday 11/01/08 The reserve teams visit to Crowborough was called off last night. This weekend sees the first team take on Chichester City United at the Beacon, with a 3pm start, and on Sunday the youth team face Peacehaven and Telscombe away, kicking off at 11am. The veterans are also in action, facing Ardingly with an 11am start

Wednesday 09/01/08 Last nights first team game against Ringmer was called off. On Thursday night, the reserves travel to Crowborough, with a 7.45pm kick off at the Crowborough Community Stadium.  On Saturday 16th February, the club will be holding a Race Night at the Beacon. It will begin at 7.30pm, and there are chances to win big cash and other prizes. Please come along and support what is guaranteed to be a good evenings entertainment

Monday 07/01/08 Saturday saw the first team pick up a 1-1 draw away at Oakwood, with Pete Lear netting. The third team drew 2-2 with Forest Row, with goals coming Phil Wickwar and Adam Williams. Tomorrow night, Ringmer visit the Beacon in the fourth round of the John O'Hara cup, with a 7.45pm kick off

Fansite of the Hassocks Sports Team